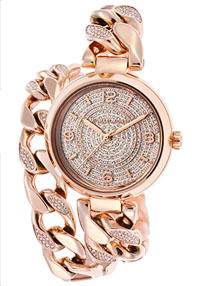 With some brands of watches, such as Rolex, the name is famous for timepieces.  The company may have branched out over time into other areas, but they’re primarily known for watches.

Not the case with Michael Kors watches; in this case, the company is best known for their women’s (and later, men’s) fashions.  Numerous actresses have shown up for the Oscars wearing Kors gowns, and First Lady Michelle Obama posed for her official White House portrait wearing a sleeveless Kors gown.

Despite being essentially self-taught, Michael Kors has truly built a fashion empire, and his net worth is now in the billions.  That’s quite impressive for someone who started designing clothes in his parents’ basement as a child.

Like many fashion designers, Kors has diversified his product lines over the years.  While initially offering only clothing for women, the company now offers men’s clothes as well as fashion accessories for both sexes.  That includes a surprisingly large variety of Michael Kors watches.  At present, the company offers more than fifty men’s designs and more than one hundred designs for women.

These Michael Kors watches range from chronograph-style models, such as the Wyatt, to the classy and elegant Darci, which could function both as an accessory for work as well as a striking addition for an evening out.

The build quality for the entire line of Michael Kors watches is surprisingly good; these watches feature Japanese-made quartz movements, and both silver and stainless steel bodies.  Styles include both Arabic and Roman numerals, and strap and bracelet models.  Many of the models are also water resistant to as much as one hundred meters, meaning that you won’t have to worry about taking them off or having to wear another timepiece if your plans include spending time at the beach or outdoors.

Michael Kors watches are manufactured by the Fossil Group, a large manufacturer of timepieces.

The convenience of the quartz movement means that you can count on reliable time for years without having to worry about winding.  Battery replacement is quite simple, and can be done by any reputable jeweler.

If you pay any attention to the fashion market, you will likely be aware that this company’s products tend to be rather pricey.  That’s especially true for women’s fashions; the company’s dresses, while often stunning, can run well into the high four figures.  Some of the company’s handbags cost even more, with prices ranging as high as $13,000.

That’s quite a steep amount for anyone’s pocketbook, and certainly out of reach for the average consumer.  That’s why it comes as a pleasant surprise to see that the entire line of Michael Kors watches are quite affordably priced not only when compared to the company’s other products, but even when compared with other designer timepieces in general.  Ladies’ models currently start at as low as $135, and top out at a bit more than $500.

The prices for men’s models are even more affordable; they currently start at a little over $100 and the most expensive model at the moment, the Jetmaster Automatic, is priced at a relatively modest $395.  As such, this brand offers not just a good value for watches in general, but they also offer an affordable fashion accessory.  In addition, they provide a great opportunity for the cost-conscious consumer to own a genuine name brand at a price that nearly everyone can afford.

Don’t be fooled by the prices; all of these timepieces are crafted to the same standards, with high quality stainless cases, dead-accurate quartz movements, and good water resistance properties.  They don’t lack function, either.  While many models in the product line are relatively simple in design, displaying only the time, other models, such as the Men’s Chronograph, include a second hand, the date, and inset dials indicating 60 seconds, 60 minutes, and 24 hours.

Ladies models, such as the Camille, offer similar features at a surprisingly attractive price point.  If you’re worried about the prices, don’t be.  These beautiful timepieces are priced so that nearly anyone can include one among their fashion accessories. 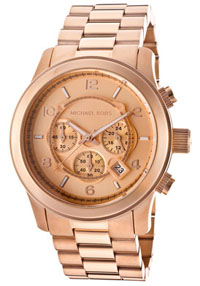 One of the reasons that the brand is so affordable is their practical construction.  While available in gold and silvertone, no precious metals are used in the cases, or are any jewels used as decorative items.

This not only makes them practical, but you’ll worry less while wearing one in public, as you won’t have to overly concern yourself with theft, as owners of Patek Philippe or Rolex watches often are.  The stainless steel construction makes them sturdy and reliable, and you can rest assured that your watch will provide years of reliable service while additionally serving you well as a beautiful fashion accessory.

Unlike a few brands that only permit sales through a handful of jewelers, you can find the brand for sale at a variety of retailers, both online and at brick and mortar retailers.  The company offers them for sale on their own Website, but you can also find them for sale at most upscale department stores, as well as many online watch retailers.  Do be careful, of course, when purchasing one, as nearly every major brand of designer watch has been counterfeited.

Many fakes have been seen, mostly imported from China.  When choosing a place to purchase a legitimate timepiece, be sure to buy only from reputable retailers who will guarantee the authenticity of the product.  Beware of any seller who will not accept either PayPal or a major credit card for payment, as both of these payment methods will allow you to file a claim should you discover that your purchase was fraudulent.