On our site, we review luxury watches, so it’s not uncommon for us to talk about watches that are expensive.  That term means different things to different people, of course; what is expensive to one person may be walking around money to someone else.  Still, most of the watches we regularly discuss on this site are priced anywhere from $1000 to as much as $500,000, and for most people, that’s a lot of money.  For the serious watch collector, however, that price range is merely a starting point.  For a great example of that, one only need look at the recent sale of the legendary Patek Philippe Henry Graves, Jr. Supercomplication, billed as the world’s most complicated watch, which was sold by auction house Sotheby’s on November 11, 2014, for $24 million. 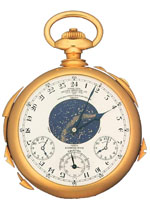 The Supercomplication, as it is generally known, is perhaps the world’s most famous watch; it’s even had a book written about it, “A Grand Complication: The Race To Build The World’s Most Legendary Watch” by Stacy Perman.  It’s actually a pocket watch, rather than a wristwatch, but it was made to personal order by Patek Philippe for American industrialist Henry Graves, Jr., who had somewhat of a personal rivalry going on with fellow American James Ward Packard to see who could own or possess the most complex timepiece.  As it happens, Graves won the competition, by having Patek Philippe build the Supercomplication, which included 24 complications, but also by virtue of the fact that Packard died while the watch was being designed.  Still, the finished product, which took from 1925 to 1932 to design and build, was more complex than anything Packard owned, and remained the world’s most complex mechanical timepiece until Patek Philippe did themselves one better by creating the Calibre 89 in the late 1980s. 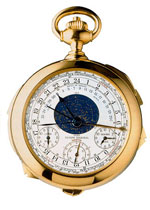 The Supercomplication is an impressive timepiece by any measure, but it’s particularly impressive when one considers that it was designed entirely using manual calculations.  Today, computers are used in designing complex timepieces, but in the 1920s, that wasn’t an option and that may have a lot to do with the long gestation period in creating the piece.   With nearly 1000 parts, and a complex case that had two faces, the Supercomplication was truly a testament to the abilities of the engineers at Patek Philippe, who not only had to decide what each of the features should do and how to make them do it, but who also had to find a way to incorporate each of those features into the same case as all of the other ones.  All of those parts had to live and work together in harmony within the same small case.

The rather wide pocket watch measures roughly 73 mm wide, features a gold case, and has two faces with indicators on each side of the timepiece.  The face indicates that it was made by Patek Philippe especially for Henry Graves, Jr.  That’s fine, and presumably, it will tell the time of day.  But what else does it do?

Among its many functions are the following: 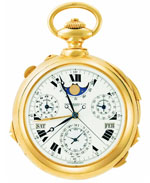 The chimes can be turned on and off as the user wishes and switched between a petite and a grand chime.  The minute chime is a “Westminster” chime that plays the chime from the famous “Big Ben” clock in London.   All in all, this is an astonishing piece of workmanship, though the finished piece, which weighed more than a pound, was really too large and heavy to be a practical timepiece.  That’s actually good news, as it means that the timepiece has been remarkably well preserved over the years as it has seen relatively little use, which might not have been the case had Graves actually carried the watch around with him on a daily basis.  The large size and weight ensured that he wasn’t going to do that, and the piece also offered little in the way of helping him win his competition with Packard, as he was long-dead by the time that the finished timepiece was finally delivered in 1933.  Graves passed away in 1953 himself, and the watch stayed with his family, who sold it to a museum in 1968.

The museum closed permanently in 1999, and at that time, the watch was sold by Sotheby’s auction house for what was then a record price $11,000,000.  The name of the buyer was not disclosed at the time of the sale, but it turned out to be a member of the royal family of Qatar, Sheik Saud Bin Mohammed Bin Ali Al-Thani, who subsequently lent the watch back to Patek Philippe for a number of years.  During that time, the company had the timepiece on display at their corporate headquarters.  In 2012, the name of the owner became public when it was announced that the owner was returning the legendary timepiece to Sotheby’s as partial repayment of an outstanding debt.  With that, it appeared that this one-of-a-kind mechanical masterpiece would be publicly sold once again.  It’s worth noting that the underbidder at the 1999 auction, topping out with a $10 million bid, was the builder, Patek Philippe.

The bidding was aggressive, and took place primarily between two bidders.  The winning bid, with buyer’s premium, was 23.2 million Swiss francs, and the buyer, not surprisingly, chose to remain anonymous.  It is unknown at this time what the buyer plans to do with his or her purchase, but a lot of people in the industry hope that it will be put on public display where it can once again be seen by the public.

While the Supercomplication remains in a class by itself, it’s hardly a remnant of a bygone era.  In the 1970s, the entire Swiss watchmaking industry was concerned that quartz movements from Japan were going to completely take over the industry, relegating the craft of mechanical watchmaking to the dustbin of history.  Times have changed, however, and a growing number of buyers and collectors have once again taken interest in mechanical timepieces with extra complications.  Leading the way, of course, is the Supercomplication’s builder, Patek Philippe.