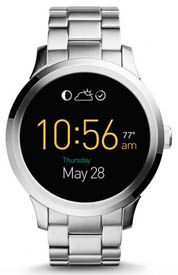 As we’ve all been reading for a couple of years now, the smartwatch is supposed to revolutionize timekeeping.  We’re all going to throw away our Rolexes or Citizens or whatever it is we’ve been wearing on our wrists all of our lives in order to swap it out for something that’s connected.  That’s great, in theory; more features are always welcome.  But most smartwatches look awful.  That’s where the Fossil Q Founder comes in. Someone has finally come up with a smartwatch that looks like a wristwatch.  Even better; it looks like something you’d be proud to wear and something that won’t make you look like a computer geek or a gadget chaser.

Most people who like wristwatches aren’t technology phobes; after all, wristwatches have been incorporating advances in technology for centuries now.  Features that we take for granted in a wristwatch, such as moon phases or a calendar or an alarm were at one time considered revolutionary advances in timekeeping.  But the basic look of watches hasn’t changed all that much over the years – until recently, when smartwatches came along and looked rather geeky.  Technophiles were happy, but longtime watch fans were not.  The Fossil Q Founder may be changing that.

Perhaps the best feature of the Q Founder, from the viewpoint of longtime fans of classic watches, is that it looks like a wristwatch.  The Q Founder comes with either a steel or leather band and has a case that’s shaped as you’d expect it to be.  Obvously, the face is going to be different, and it has a 360×326 display that’s going to give you access to the many features inside.  You’ll also find that the Q Founder includes 4 GB of storage and a promised 24 hour battery life.  If there’s one thing watch fans don’t like about smart watches, it’s the short battery life.  Twenty four hours of life may be touted as a feature, but if you’re accustomed to wearing watches with batteries that work for years, then 24 hours isn’t all that impressive.

As you might expect, the Q Founder runs on Android, and is powered by an Intel Atom CPU.  This will differ from many Android smartwatches, as most of them to date have used Qualcomm chips for the main processor.  The watch also includes an accelerometer, a light sensor and a gyroscope.  You won’t find a heart rate sensor, so if you’re in need of a smartwatch that will help you during your workout, you’ll have to find something else.

The Q Founder has been designed to work with both Android-based and iOS smartphones, which will help a lot with compatibility.  Recharging is done through a proprietary base plate; we’ll leave it up to you to decide if that’s a feature or a bug. 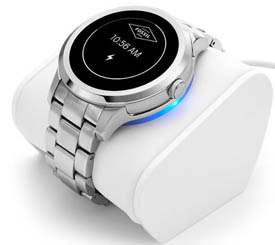 On the other hand, the Q Founder looks good, and that’s a feature that is sorely lacking in this market segment.  Granted, a lot of people who buy smartwatches don’t care so much about looks as features, but there are companies that make feature-driven smartwatches for that crowd.  Fossil is looking at a different market segment, that being people who want to wear watches as a fashion statement, but wouldn’t mind having the features that a smartwatch includes that you can’t find in a traditional wristwatch.  If you’re looking for something with enhanced features that isn’t going to embarrass you when you wear it in the boardroom or at a nice restaurant, then the Q Founder will be a nice addition to your collection.  It’s reasonably priced, too, coming in at under $300 retail.

That price point is important; the only other similar timepiece is the Tag Heuer Carrera Connected, which has a retail price of $1500.  Obviously, the lower price point is going to be appealing for many potential buyers.

On the downside, a lot of people don’t care for the display on the Q Founder, as it’s not completely round.  There’s a spot at the bottom of the display that people are referring to as the “flat tire.”  It’s just a curved dead spot that has no function.  We didn’t find it all that distracting, but others feel differently (and strongly) about it.  By all means, be sure to check that out in person if you’re planning on buying one. 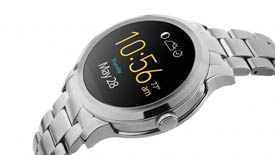 As you might expect, the traditional watch industry has been slow to adapt to the smartwatch trend.  It’s not that they aren’t interested, but again, you have to remember that the watchmaking industry goes back for centuries.  Trends come and go in that field, and one thing that watchmakers have learned, time and again, is that what goes around comes around.  In the early 1970s, when watches with digital displays became all the rage, the industry began to suffer as buyers flocked to quartz models that lacked traditional hands on the display.  Even Rolex got into the game, making the short-lived Oysterquartz series.  While that line had traditional hands, the movements were all electronic.  In time, Rolex gave up and went back to what they do best, making quality watches with mechanical movements, but not before spending a fortune developing a line of watches that turned out to be relatively poor sellers.

The industry remembers this time, and while they did manage to recover from it, they’re not eager to repeat the mistake of throwing everything they have into a new technological fad that might or might not stick around for any length of time.

With Fossil and Tag Heuer jumping into the fray with smartwatches, it’s only matter of time before other major manufacturers offer their version of the smartwatch.  We wouldn’t expect Patek Philippe or Rolext to participate anytime soon; they’ll likely either take a wait and see attitude or they’ll just not bother, which is the more likely outcome.  Still, for those who want a good looking watch that won’t embarrass you when you’re seen in public and which has the features that gadget lovers enjoy, the Fossil Q Founder looks like a great compromise.