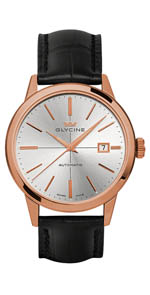 Glycine watches have been made in Switzerland since 1914, and they offer a rich tradition of innovation, styling and build quality.  After a few decades of lackluster sales, the company found new owners in the 1980s and has since become one of the world’s premiere luxury watch brands.

While their styling leans towards diving and aviation models with oversized cases, they also offer a nice selection of watches with traditional styling and include both automatic and quartz models in their lineup.  If you’re looking for a high-quality Swiss watch and want something a bit different, you should definitely consider Glycine watches.

Read on for the full Glycine watches review.

The build quality is quite good, with stainless steel cases and scratch resistant sapphire crystal protecting the watch face.  Water resistance varies, but we’ve seen models rated at up to 150 meters.  Since most of their models are for land use, that’s more than adequate.  These are finely crafted, Swiss-made watches that should run well for years.

While Glycine watches have traditionally featured automatic mechanical movements, there are a few models in the lineup that have electronic quartz movements.  As they were innovators in early self-winding watches, they tend to favor such movements in their lineup.  As the company is based in Switzerland, all of the movements are Swiss-made.

These watches have long come from a company known for innovation.  They developed an early self-winding movement independent of other watchmakers.  Their Vacuum chronometers, introduced in the early 1950s, were designed with rugged shock resistance and improved water resistance.  Their Airman model was well received by pilots and members of the military and many U.S. pilots wore them during the Vietnam war. 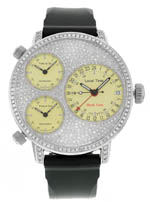 Styling of Glycine watches falls into two distinct camps – their Classics line features models that could be described as having austere, traditional styling that wouldn’t look out of place in a 1950s boardroom.  The rest of their lineup, including the Airman and Combat lines are more sports and aviation inclined, with oversized cases, chronograph features and robust shock and water resistance.

These aren’t watches for the ladies; these watches are designed for the man on the go.  Many of the models in the lineup are limited editions; some models have been produced in quantities of as few as ten pieces.  Bands are available in stainless steel, leather and rubber, depending on the model.

You won’t find much color in the product line; they tend to favor white and black faces, so don’t look for pinks, greens or blues, but we have seen a model or two with some orange, so they’re not entirely opposed to bright colors.

Care and maintenance will vary, depending on the model.  Quartz models will require relatively little maintenance, aside from replacing the battery every two years or so.  Models with automatic movements will need to be serviced every few years; most companies recommend every five years or so.  Servicing generally involves opening the case, cleaning the parts in the movement, replacing worn parts and lubricating the entire movement.

The watch is then reassembled and tested for both water resistance and accuracy.  Aside from these considerations, you’ll want to store your watch in a cool, dry place and keep them away from temperature extremes and strong magnetic fields, as this can harm the movement.  With proper care, you should get decades of useful life out of your purchase.

The warranty is the industry standard; the company warrants their products for two years from the date of purchase against defects in materials and craftsmanship.  This is a typical warranty; probably 90% of all watchmakers offer a two year warranty. 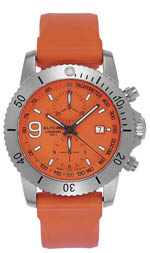 As luxury prices go, pricing falls in the middle of the range that might be described as “expensive.”  All of their watches are priced in four figures; the lowest list price we’ve seen for any of their models is about $1200.  At the top of the line, we’ve seen some limited edition models priced at $10,000 or so.

Collectors love the brand, and older models are in particular demand and can sell for considerable sums.  You can also expect price appreciation on some of their limited edition models, many of which are produced in quantities of less than fifty.

Officially, the brand is available from only a select number of “authorized” retailers.  The company does this in order to keep demand ahead of supply, which allows the company to keep prices high and to avoid having their products appear to be either common or ordinary.

As such, you’ll likely find them for sale only at select high end jewelry stores in major cities.  Unofficially, there are a number of retailers who carry the brand; you’ll find some of them on the Internet and that’s your best place to buy at a discount.  The product line is fairly large, so don’t be surprised if no single retailer stocks everything.  That’s particularly true of their limited edition models, which tend to be really limited.  Still, you should see a good representative sample for sale.

This brand isn’t for everyone; they make watches for men with oversized cases and designs that are suited for aviation and sport, with a few traditional designs included in their product line.

As such, they’re not going to suit everyone’s taste, but these watches are well built, offer a rich tradition of mechanical watchmaking, are robust enough to last a long time and are unusual enough to attract attention even in the company of people who think they “know” watches.

If you want something that’s attractive, accurate and a bit off the beaten path while still offering Swiss build quality, you might find Glycine watches to be right up your alley.