While millions of consumers are eagerly awaiting Apple’s new smartwatch, other manufacturer’s are trying to get a head start in the game, perhaps to dilute Apple’s expected dominance before they even introduce a product.  The Huawei Watch, introduced this week at the World Mobile Congress trade show in Spain, looks like a good early attempt to preempt Apple.

While Apple hasn’t yet officially introduced the Apple Watch, photos have been floating around the Internet for a while, and if they’re accurate, the Apple Watch is going to be a product that’s more 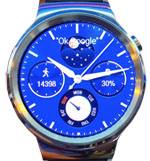 about function than form.  That’s fine, if you want one so that you can keep up with your texts or email messages or if you need to monitor your heart rate while working out.  For a lot of consumers, particularly those who don’t ordinarily wear wristwatches, that’s going to be enough.  Lots of others, particularly those who are accustomed to wearing a watch, are going to want something that has a more traditional look to it, and that’s where the Huawei Watch comes in.

The Huawei Watch, produced by a Chinese telephone giant and powered by Google’s Android Wear softwear, features a 1.4 inch OLED screen that’s touch-sensitive, much like the screen on a smartphone.  The Huawei Watch screen features 286 dpi resolution, which is modest by smartphone standards, but this is expected to improve with time.  The Huawei Watch is powered by a 1.2 Ghz Snapdragon processor made by Qualcomm and includes 512 of RAM and an additional 4 GB of storage and can communicate with any smartphone running Android 4.3 or higher.

All of these features that are included in the Huawei Watch are interesting, but not the reason that people are getting excited about this new timepiece.   The appeal of the Huawei Watch is driven by the fact that it actually looks like a traditional wristwatch.  The Huawei Watch case is round, the display can be tailored to look like a traditional analog display, and at first glance, you’d think you were looking at a luxury chronograph, rather than a twenty first century wrist computer. 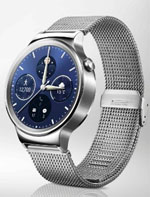 The Huawei Watch is trying to avoid a repeat of what happened in the market in the 1970s when the industry started to embrace quartz-powered wristwatches with digital displays.  Yes, they were modern and sleek and high-tech, but they were also ugly and unappealing to buyers and over time, the digital look, with faces that were often flat and square, went away.  It’s interesting to note that while most watches sold today are powered by quartz movements, the overwhelming majority of these electronic timepieces actually have analog displays and moving hands.  While the Huawei Watch can’t possibly duplicate that, it can replicate the look, using graphics to give the appearance of an analog display, even though the watch “face” is actually a computer screen.

The telecom giant isn’t stopping there, however.  The Huawei Watch will also give buyers quite a number of options regarding the appearance of their timepiece.  The company announced that there will be more than forty different face options for the Huawei Watch, as well as a number of band and strap choices.  In addition, cases will be available in gold, silver and black.  There’s no word yet on the price, though we’ve seen speculation that the price may come in around the $250 mark, and perhaps even less.  It’s hard to say, but the Chinese have a number of advantages over other manufacturers when it comes to production costs. 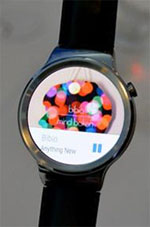 The market for smartwatches is going to rapidly become segmented, as there are going to be buyers who never wear a watch, perhaps using their smartphones when they need the time, who are going to buy a smartwatch because they enjoy being early adopters.  Others aren’t all that interested in buying a smartwatch for its own sake, but are fans of the Apple brand and will buy one out of loyalty when the Apple Watch finally makes its expected debut next month.  Still others are simply fans of wristwatches or collectors and they’re going to want a smartwatch of some sort to add to their collection of timepieces.   Lots of people own a number of wristwatches and choose one on a daily basis, depending on what they’re doing, what they’re wearing, or where they are going.  For them, a smartwatch is going to be another accessory, but they’re absolutely going to want one that looks like a watch, and not like a brick with a leather strap attached to it.  It’s this last group of buyers who are going to be the most impressed by the Huawei Watch, as it looks more like a proper wristwatch than anything else on the horizon.

In the end, of course, the Huawei Watch and others that emulate its design aspects are going to be left behind by whatever Apple chooses to release.  That’s just the reality of the marketplace, as Apple remains the 900 pound gorilla of the technology world right now.  Apple can seemingly persuade anyone to buy anything, and their biggest chunk of the market is going to be the chunk of the market that they create themselves by turning people don’t care about timepieces into wristwatch wearers.  They won’t eat into the market for the likes of the Huawei Watch at all, since they were never going to buy such a device, anyway.

For those of us who admire the art of watchmaking and who revere the traditional look of the wristwatch, the Huawei Watch is a step in the right direction.  It will be interesting to see if some of the old-school Swiss watchmakers, such as Rolex or Omega, jump into the fray.   Then again, they learned some valuable lessons in the 1970s with quartz watches, so perhaps they’ll just sit this one out.  Either way, the Huawei Watch is going to turn some heads.