The Benefits of a Radio-Controlled Watch

People have all kinds of reasons for owning anything, and that’s as true of luxury wristwatches as anything else.  Perhaps you like the idea of a bold fashion statement. Perhaps you want to convey status or affluence to those you meet.  Perhaps you have a need for an accurate tool that has useful functions above and beyond the need to know the time, such as chronograph functions, depth gauges or barometers.  Or perhaps you simply want a device that displays the time accurately.  For the last use, people have been spending thousands of dollars and more over the last hundred years or so to buy highly accurate, precise, reliable mechanical devices that can display the time to an accuracy of a few seconds per month.  It’s a testament to the watchmaking industry that mechanical devices have been able to become so highly accurate.  Of course, in 1969, the quartz watch was introduced to the market, and a minor revolution took place that led to the creation of affordable timepieces that were far more accurate than any mechanical timepiece yet created.

If we fast forward some forty years, we’ve come to a time when even a luxury watch with a quartz electronic movement has to take a back seat to something even more accurate – a watch that keeps accurate time by regularly synchronizing itself with either a radio signal associated with an atomic clock or with a Global Positioning System that provides a signal in coordination with various atomic clocks.  These are far and away the most accurate timepieces yet created, and keep what is essentially “perfect” time.  While they were originally quite expensive, with prices in the four-figure range, radio-controlled watches have since dropped in price and can be purchased for reasonable amounts in the mid-hundreds of dollars.

Below are a few reasons that it might make sense for you to own a radio-controlled watch.

1.  Obviously, accurate timekeeping.  While watches with quartz movements can stay accurate to within a few seconds per month, a watch with access to an atomic clock can be accurate to within a few hundredths of a second at any given time, depending upon how often it synchronizes with the timing source.  This can vary a bit, depending on where you are, as access to the appropriate radio signals aren’t uniform across the globe.  Access is good in the U.S., Japan and Europe.

2.  Ease of use.   With most watches, you need to occasionally set the time or the date or both.  In the case of watches with mechanical movements and day or day-date features, you can damage the watch if you attempt to change the date late in the day.  With a radio controlled watch, this isn’t an issue; it will probably be working when you receive it and it will already be displaying the proper time.  If not, it will do so shortly after being activated.  After that, you won’t have to worry about setting either the time or the date again.  It will just run – accurately.  It will even adjust automatically when Daylight Saving Time comes around or when you change time zones.  Travel a lot?  Not a problem.  Your watch will adjust.

3. Little in the way of maintenance.  Mechanical watches need regular care, and that’s particularly true of luxury brands such as Cartier, Rolex or Chanel.  You’ll have to send these back to the company every 3-5 years to have them serviced in order to ensure that they’re working properly.  This isn’t a courtesy; you’ll pay good money to have these timepieces serviced, and sometimes it can cost nearly $1000 to have the work done.  Sure, you’ll get back a timepiece that’s as good as new, but in the meantime, you’ll have to do without a watch and you’ll have to spend the money.  In five years, you’ll have to do it again.  That’s not the case with a radio controlled watch.  You will need to replace the battery every now and again; most watches can go several years without needing a battery replacement.  Other than that, you won’t have to worry about any maintenance.  If you happen to have a watch with Citizen’s Eco Drive, you won’t even have to replace the battery – the watch is solar powered!

4. Affordability – Radio controlled watches originally cost thousands of dollars.  Of course, at one time, so did any quartz watch.  Over time, advances in technology and manufacturing usually help bring the prices down and that’s the case with radio controlled technology.  You can certainly pay a few thousand for one, but you don’t have to. Models are now available for just a few hundred dollars.  The primary makers are the Japanese companies, including Seiko and Citizen, though other companies make them, too. 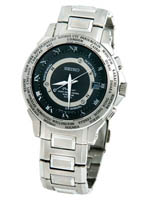 5.  Geek factor – OK, this isn’t for everyone, but some people just love gadgets.  That’s why there are lots of watches out there that have lots of functions besides the time.  Even people with mechanical watches love gadgets and so do the people who make them.  They call them complications and watchmakers have been engaged in informal competition for decades to try to make the most complicated watch possible.  That sort of mentality is what drives some people to purchase gadget-laden wristwatches and the radio controlled watch is just the sort of unusual feature that might appeal to people who just love gadgets.  Few people need the super-accuracy that comes with a watch that synchronizes with an atomic clock, but you do get to tell your friends “My watch gets its time from an atomic clock!”

As we pointed out initially, everyone has their own reasons for buying a luxury watch.  Perhaps you want to show off.  Perhaps you have a lot of money and just like nice things.  Or perhaps you simply want to enjoy the latest that technology has to offer.  Regardless, it’s possible to get a highly accurate and attractive radio controlled watch that will keep good time, keep running without a lot of maintenance and look good.  You don’t have to sacrifice one benefit to get another.  If you like attractive timepieces and dead-on accuracy, a radio controlled watch can be a good choice.