SIHH Introduces the Insane and the Ultra Expensive

In the world of luxury wristwatches, it’s important to get your name as well as your products out there where the public can find out about them.  While press releases can certainly do the job, it’s far more effective to display your newest, latest, and most unusual designs to the public in a venue where a large number of people can see them at once and comment on them via social media.  For the watch industry, that means trade shows, and one of the most prestigious trade shows in the watchmaking industry is going on right now in Geneva, Switzerland – SIHH, or Salon Internationale de haute horlogerie.

SIHH is not the largest watch show, by any means, but it is a very prestigious one, as only a handful of watchmakers are represented and they all come from the ultra-high end of the market.  With that come their designs, which are going to include lots of gold, lots of diamonds, and lots of features and complications that range from the clever to the “what were they thinking?”  The end result, of course, is to generate buzz, and there’s no shortage of buzz surrounding some of the models displayed this week at SIHH.

SIHH is quite an exclusive trade show; only sixteen brands are on display there this week and 13 of those are brands owned by a single company – Richemont.  Those brands include Dunhill, Baume & Mercier SA, Cartier, IWC International Watch Co. AG, Jaeger-LeCoultre, Montblanc, Piaget SA, Manufacture Roger Dubuis SA, Vacheron Constantin SA, and Van Cleef & Arpels, among others.  The Richemont family of watches will share the venue with just three other luxury brands.

Parmagiani also displayed another model that had everyone buzzing – the Pantograph has an oval shaped face, but has telescoping hands that extend and retract as they rotate around the face.  This ensures that the tips of the hands are always the same distance from the edge of the watch face.  This wasn’t something that was just tossed together, either, as each of the hands consists of more than 30 parts. 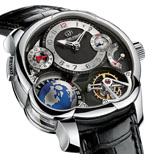 In the category of offering odd design and odd features, all in one, Greubel Forsey offers their new GMT Black.  This model offers to display the time in two time zones.  OK, lots of watches do that, but what’s so special about this one?  It has a titanium case that’s been treated with amorphous diamond-like carbon, which renders it unusually hard.  The movement features a tourbillon.  Then comes the outrageous – a rotating globe that makes a full rotation every 24 hours – just like the Earth.  It wasn’t possible to fit all of this into a standard watch case, so the resulting timepiece is rather oddly shaped.  That said, you’re not going to find anything else out there that even vaguely resembles this one.  As you might expect, this model from Greubel Forsey isn’t going to be mass-produced, and fewer than two dozen pieces will be built.  The price runs just north of half a million dollars. 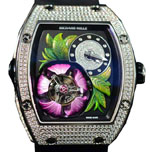 One of the oddest pieces shown this week was a model from Richard Mille – the Tourbillon Fleur.  This unusual timepiece, amply decorated with diamonds, shows what appears to be a flower and leaves on the face.  At five minute intervals, however, the flower “opens” to display the tourbillon underneath.  This model is going to be limited to approximately 30 pieces, and the price will exceed $1 million.  It’s not for everyone, and the design may be a bit too busy for most, but it is truly one of the most unusual designs ever.

Baume & Mercier showed off a prototype model that was created with a 3D printer.  They’ve actually gotten to the point where they can print a working watch in just a few hours.  We don’t expect to see this in widespread production anytime soon; it’s mostly just another example of the “Hmmm…Can we do this?” way of thinking that is common in the watchmaking world these days.

Montblanc introduced a rather attractive timepiece, the Heritage Spirit Orbis Terrarum, which can show the time in 24 time zones at once.  While such features will necessarily suggest a cluttered look, the watch actually manages to keep the clutter to a relative minimum.

While watches that have a tourbillon are fairly common among luxury brands, Cartier introduced a model, the Rotonde de Cartier Astrotourbillon Skeleton, that features a tourbillon that revolves around the watch face.  They built this into a skeleton model so that you can see the works moving, either from the front or the back.  This model will be limited to 100 numbered units, and the price is rumored to be in the $500,000 range.

The purpose of SIHH is different from other trade shows, where deals are often made for wholesale quantities of the products shown.  This show is different, as the products on display are either prototypes of models that aren’t available for sale at any price or their examples of super-limited-edition models that aren’t available in any kind of quantity to anyone.  It’s not about making sales, per se; it’s about generating buzz, getting people talking about your brands, and generating interest in the industry as a whole.  The sorts of features on display at SIHH this week aren’t likely to trickle down into lower-end models in the future.  They’re simply there to show the public, the press, and the rest of the industry what is possible  To that end, these companies have been quite successful, and many of the models we’ve described here are the talk of the watch world this week.  People will likely continue talking about them…until SIHH next year, when even newer and more outrageous models arrive to replace them.